App with the game of cosmetic surgery

App with the game of cosmetic surgery 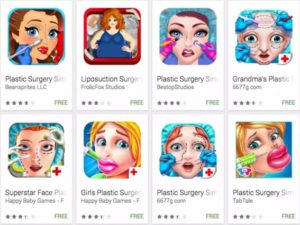 By downloading the free App ‘Superstar Plastic Surgery’, kids section (more than 100,000 downloads, in Italian) from any mobile phone, you can become a guru of the aesthetic scalpel for ‘famous Hollywood’ patients. With the simulator you can administer Botox and anti-wrinkle. It can also repair broken nose bones, plump lips and face. Cut the skin, make beautiful faces swollen from bruises, swell the lips, stretch the skin, remove marks and scars. There are hundreds of similar apps available for free download on Google, Amazon, and Apple. The report published in Great Britain by the Nuffield Council on Bioethics denounced the phenomenon of apps dedicated to English children that offer “the cheerful surgeon’s game”. In the globalized and democratic world of the internet, however, there are no borders between states and so it turns out that Italy is not excluded from the new trend. “Who can resist the temptation of beauty?” Reads scrolling through the descriptions of the various games, or ‘How do celebrities keep themselves so beautiful? What happens in the everyday life of a celeb? Run a beauty clinic in Beverly Hills and you will find out ‘. The Nuffield Council on Bioethics has put the phenomenon under observation. The Council, made up of a large group of experts (anthropologists, philosophers, psychologists, plastic surgeons, hospital doctors, ethicists, jurists and researchers from various English universities) declared: “Social media and popular culture carry out a continuous bombardment focused on the image of the body that also reaches boys under the age of 18. The aforementioned Council expresses some reservations because boys tend to grow up with “ideals” regarding appearance. These expectations are exacerbated by all the Apps that feature cosmetic surgery as a game and not as a branch of Surgery In the concluding note, the authors hope that social media companies will collaborate to carry out independent research that clarifies every aspect of the phenomenon.